My original due date was August 18.  We decided very early on to do a repeat C-section since I failed to progress with Maddox and there was a good possibility that the same could happen with Sawyer.  So my C-section was scheduled for August 11.  My blood pressure started going all over the place.  It certainly wasn't as high as it was with Maddox but they still put me on a low dose of meds.  The meds, however, made my blood pressure drop to about 105/60ish and I would feel really bad.  So they decided to bump my C-section up another week.

I found out on Tuesday that we'd have another baby that Friday!  My nerves went all over the place.  I was definitely ready physically but mentally, not really.  My surgery was scheduled for 8:00am on Friday, August 5.  We had to be there by 5:30am to prepare.

We decided that Maddox would spend the night with Mark and Joy Thursday night (Thank God for grandparents close by, right?).  So Wednesday night when I was snuggling with Maddox before bed, I started thinking about how that would be the last night I put him to bed that he would be the only baby.  Thankfully, he was in a snuggly mood so while he laid his head on my chest, I bawled my eyes out.  I just couldn't help but wonder how on earth I could love another baby as much as I love Maddox.  At the same time, I was mad at myself for thinking that way.

Anyway, the next day after Maddox woke up from his afternoon nap, Mark came to pick him up and I started crying again as I shut the door behind them.  Darren and I went to dinner just the two of us that evening.  We kept the conversation light because my emotions were all over the place.  We went home and made sure all our bags were packed and we had everything we thought we needed for the hospital.

We went to bed around 8:30pm because we knew we had to get up by 4:00am Friday morning.  Well... that was pretty much one of the worst nights of sleep ever for both of us.  I'm pretty sure I was awake every half hour.  I guess my body just knew it was about to experience a lot of stress and change.

The next morning, I was up and moving at 3:45am.  We got to the hospital right on time at 5:30am and they took us upstairs to labor and delivery.  I changed into the oh so fashionable gown and socks and climbed into bed.  My nurse for the moment was Meredith and was super sweet.  She tried to start an IV but my vein blew on her.  I told her it would so I was prepared.  She called in another nurse to try and she found a vein on her second attempt.  Unfortunately, it was in my right hand and she said "try not to bend it, ok?"  Ummm.... But at least that part was done.  They took bloodwork and started an IV.  The anesthesiologist and assistant came in and talked to me.  I addressed my concerns about pain meds and the way I seem to react to them.  I told them what the oxycodone and hydrocodone did after I had Maddox.  They agreed to try different options.

Our time got bumped back a little but around 7:45am, I walked down to the OR.  It was somewhat calming because I knew mostly what to expect but at the same time, it was nerve wracking because I knew what to expect!  I was given a spinal and epidural just in case it took longer than expected because of scar tissue, etc.  I went numb really fast and couldn't even help lift my feet to lay down on the table.

Once they got me laying down, I had about 5 people working on me at the same time.... yikes!  They strapped both my arms down by my side and hung a sheet up in front of me.  The anesthesiologist did a test of my numbness with a cold cloth then the doctor pinched me really hard to make sure I couldn't feel anything before he got started.  Thankfully, I was a lot more numb this time than I was with Maddox.

At that point, they brought Darren in.  I had told him if the anesthetist didn't talk to me then he was going to have to so it would keep my mind off of everything they were doing to me.  It really didn't take long before I felt a ton of pressure and pulling and they were holding Sawyer over the curtain saying "hi mama".

They took him over to get checked out and cleaned off and heard him making some "grunting" noises.  They ended up calling the peds team (pediatrics, nicu, and respiratory therapist) to check him out.  They decided to go ahead and take him to nicu as a safety precaution.  I tried to keep my emotions in check and I did pretty well because I was also concentrating on what the doctors were still doing to me and I was pretty doped up.

They continued to do lots of tugging and pulling on me and got me stitched up.  I spent the next hour and a half to two hours in recovery with Darren and my nurse, Samantha.  My blood pressure did pretty good.  We just had to stay there to wait on a room because they were so busy.  Evidently we time our babies at the same time as everyone else!  All the holiday babies were being born.

I got moved to a room and Darren was allowed to go check on Sawyer.  He sent me a picture from the nicu and my poor baby was hooked to all kinds of wires and a cpap machine to help his lungs.  The nurses call C-section boys "whimpy white boys" a lot because they come out needing help breathing. 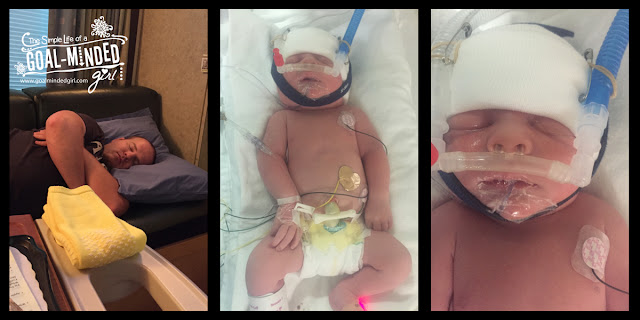 I was able to get a little bit of rest since my blood pressure was doing ok.  I was finally able to go see Sawyer around 9 or 9:30 that night.  Basically, you have to wait about 12 hours after a spinal to get your catheter out and get out of bed.  Darren wheeled me across the hospital to the nicu.  When you go to the nicu, you have to sign in, pressure wash (no joke) your hands from your elbows and down and then put on a plastic robe before entering the nicu.

We were able to speak with the nurse when we were there.  They had taken his cpap off because he kept pulling it off.  We couldn't hold him yet but I was at least able to touch him.  He looked so pitiful.  The nurse stayed there with us the entire time we were there so I kept my emotions in.  When we walked out (or I as rolled out), I pretty much lost it  I cried all the way back to the room. 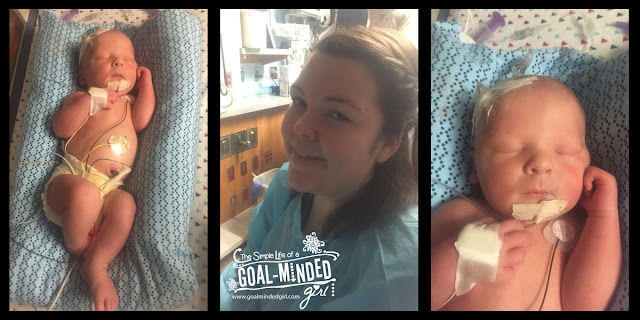 (First time being able to see and touch my baby... over 12 hours after he was born)

It's hard to not be able to hold your baby that you just gave birth to.  Once back in room, we were both exhausted physically and emotionally so we went to sleep.  The next morning, we went to see Sawyer and I was able to hold him and feed him.  We spoke with the morning nurse (Lindsay) and she was so awesome.  She was so kind and patient and gave us some space so we could enjoy a few minutes alone.  We stayed there for a bit and decided to go back to the room to rest a little and come back at lunch. 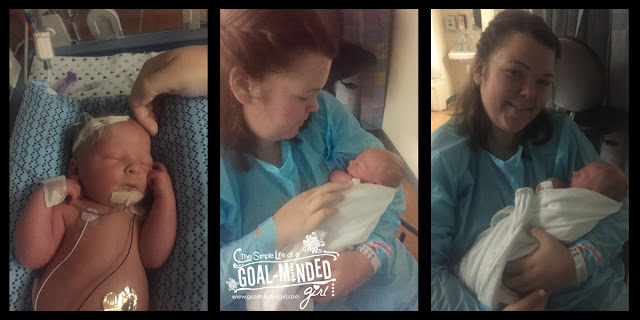 (First time holding Sawyer... 24 hours after he was born.  That was tough... but I was thankful) 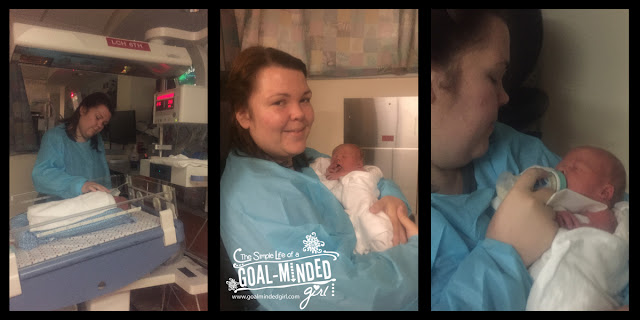 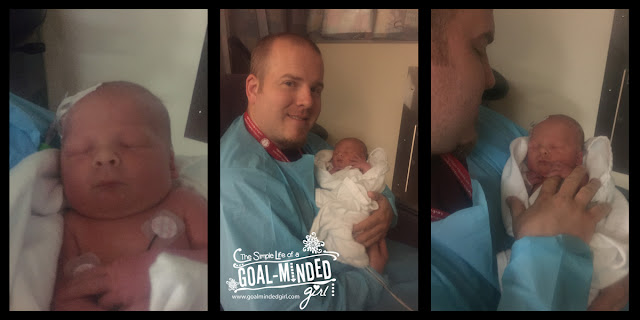 (Darren's first time holding Sawyer.  And in case you didn't know, all cell phones have to go into plastic bags so picture quality sucks!)

When we went back at lunch, the pediatrician was making his rounds and we were able to speak with him.  He said that all was well and Sawyer was a perfectly healthy baby and as soon as he had 2 consecutive normal blood sugars, he could be moved to my room with us.  I felt like a huge weight had been lifted.  We immediately thought again of how blessed we were because there were many other babies in there that weren't as fortunate to have such a fast recovery.  We went back to the room feeling much better.

Darren had to run a few errands once we got back and I went ahead and showered and go dressed and wrote in my journal for a bit, just trying to pass the time waiting on Sawyer.  Around 6 or so, they brought my sweet boy in my room and all was right with the world. 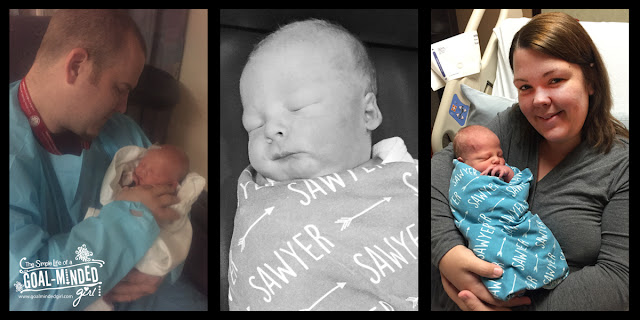 (When he was moved into our room with us.)

That evening, my parents came to visit again and were able to see and hold Sawyer.  Maddox stayed with Mark and Joy this whole time so they brought him the next morning.  He hadn't missed us at all and he didn't really care much about the baby.  He just said "baby" and ran around the room.  He didn't understand what just happened and how his world had just changed drastically.  After they left, it was just the 3 of us. 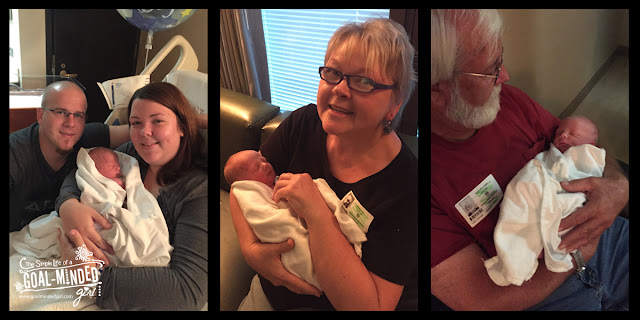 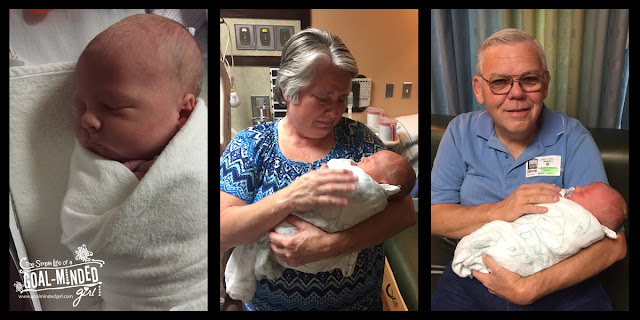 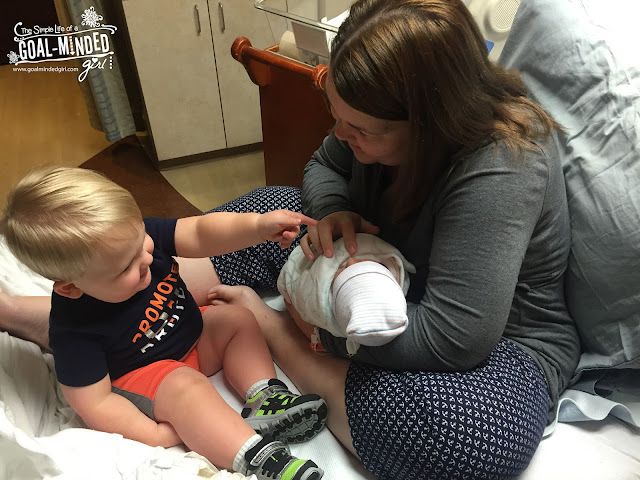 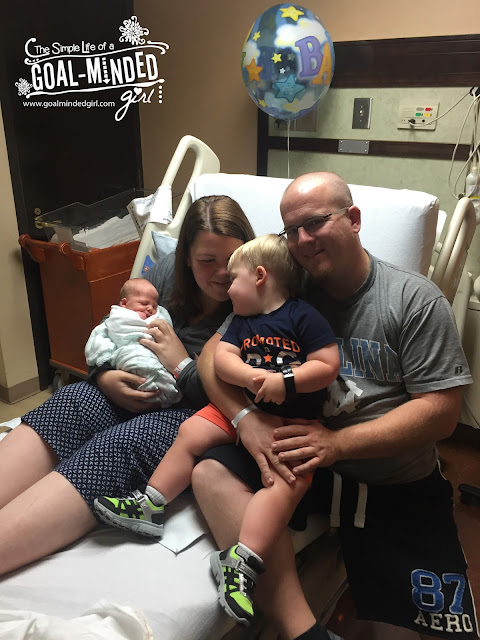 It's a whole different ballgame when it's your second baby.  The first baby, you don't know what you're doing so you're anxious a lot and exhausted.  The second baby, you just soak up the quiet snuggles because you know when you get home, its gonna be non stop chaos. 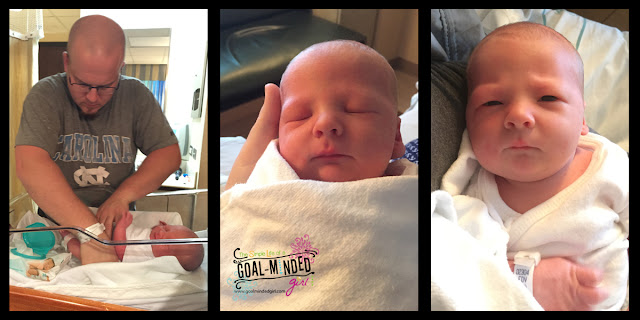 At this point, it's Sunday afternoon and we are kind of just hanging out since we know we will be there until Monday.  Saturday and Sunday nights, I had a great nurse named Taylor.  She was so helpful and made me feel like I was her only patient even though I know she was super busy. 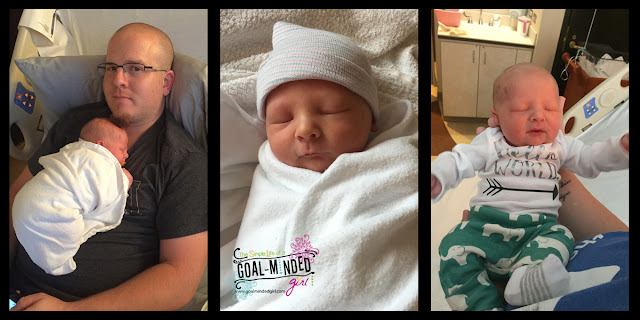 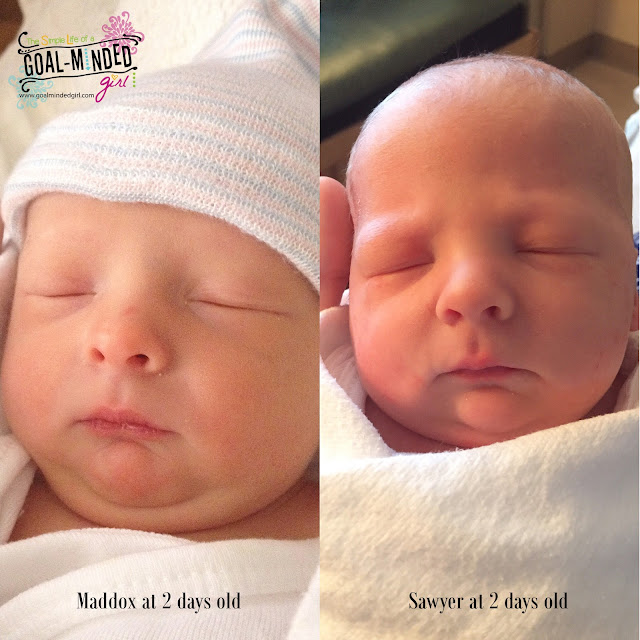