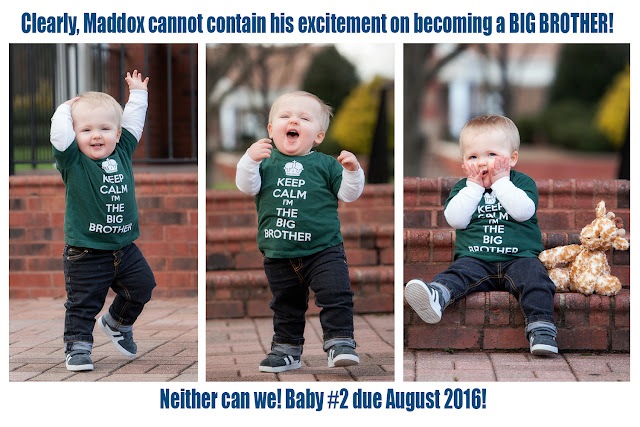 Surprise! We are so excited to announce that we are expecting baby #2 in early August, 2016.  Maddox definitely doesn't understand that he's being promoted to big brother but he's learning to say Baby so we'll get there :)

I found out I was pregnant on December 18.  I was definitely a bit shocked and in "holy crap, what have we done" mode lol  I had a few hours to think about it on my own because Maddox was napping and it was the middle of the afternoon.  I knew I wouldn't be able to keep it from Darren long but I wanted to do a little bit better about telling him than I did with Maddox.  As soon as Maddox got up from his nap, I drug him out to several stores in search of a Big Brother or just Brother shirt to change him into so Darren would see if when we got home.  But you know how it goes when you go after something specific.... you never find it!  I went to 3 different stores and started pushing my luck with Maddox so we headed home empty handed.  Darren was already home so I ran upstairs and wrapped up my pregnancy test (original, right?) and put it in a gift bag (it was Christmas time after all lol) and told him I saw something I couldn't pass up when I was out.  He guessed what it was before he unwrapped it.  Then we both sat there in shock (nervous, nail-biting shock).

I told a couple of friends because I just had to tell someone lol but other than that, we decided to tell our parents when they came over for breakfast Christmas morning (already planned.... conveniently).  When I was pregnant with Maddox, we didn't want to tell our parents until we had already gone to the doctor for a confirmation and we didn't announce to everyone until we had the ultrasound.  We decided this time around to go ahead and tell our parents even though it was early.  I knew I wouldn't have my appointment for another few weeks but it was just perfect timing with Christmas and both sets already coming over.

Fast forward... We made it through Christmas Eve festivities without spilling the beans (somehow).  We had ordered Maddox a shirt (last minute... thanks Amazon Prime) that said "Keep Calm, I'm the Big Brother".  Maddox was wearing his cute Christmas jammies when everyone got to the house.  We had a yummy breakfast and nice time together.  Then Maddox "needed a diaper change" so Darren took him upstairs to change his clothes.  We were all sitting in the living room when they came back downstairs and Darren put Maddox down to walk for himself.  He toddled in and Joy (Darren's mom) read his shirt OUTLOUD and they laughed and just went on like it was nothing at all.  I was recording it the best I could on my phone and Darren and I just looked at each other like "what in the world?!" and laughed.  Everyone was like "what?".  I said "You just read his shirt!"  We gave it a second and they got it! lol it was so funny!

So here we are now.  Confirmed pregnancy at the doctor's office and saw a sweet little moving and already kicking baby at our ultrasound.  Now bring on the anxiety lol oh wait.... already have that! hah We have decided to sell our townhouse because I'm really not the most graceful person and the thought of carrying a newborn and getting Maddox up and down stairs just really doesn't sound fun to me.  And we only have 2 bedrooms and I don't want to disrupt my amazing sleeping toddler any more than I have to.

So far, nothing crazy going on except being exhausted like I was with Maddox.  I got a really bad stomach bug a couple of weeks ago and thought it may be the beginning of some super horrible morning sickness.... but thankfully it went away after 24 hours because it was debilitating. Whew! With Maddox, I craved anything and everything sweet.  So far, this time, I've wanted really flavorful, savory foods.

That's about all for now ;)  We will find out the gender toward the end of March or so.

Posted by Melissa Smith at 5:39 PM No comments:

Five on Friday {Drool Bibs and life in general}

{ONE} Drool Bibs and More
Maddox is such a drooler.  I constantly have a bib on him.  The bibs they sell at the store are just kind of ugly to me and I figure if I had to look at them all day long, I might as well learn to make some that were cute.  I found a couple patterns for these cute bandana bibs online and adapted it for Maddox.  They are so stinkin' cute!  I played around with some different fabric choices and found that fleece is the best backing material to keep his clothes dry.  He has at least 15 or so of different patterns and such.  I decided... hey, why not see if anyone wants to buy them for their little one?! I'm thinking about opening an etsy shop but I need to make more so I can take pictures and all that jazz.

I thought if anyone reading this wanted one... well, you can just shoot me an email (goalmindedgirl@gmail.com).  I'm making them for $7 each or 3 for $18.

I'm going to start working on a couple baby blankets here and there as well.  We'll see :)
Here are a few pictures of ones I've created recently and of course my cutest little model ever. 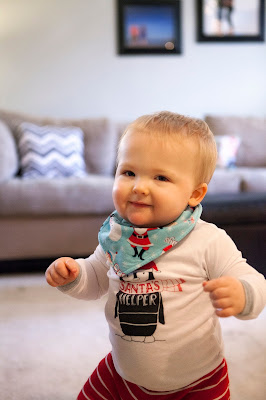 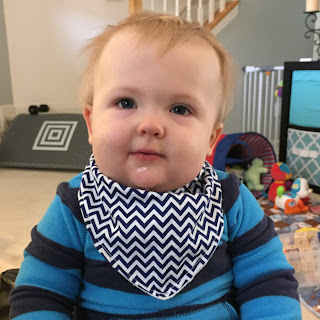 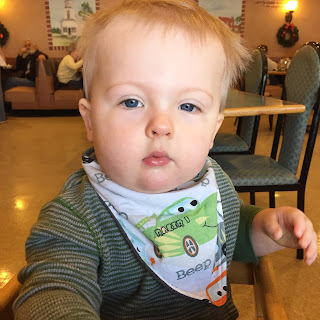 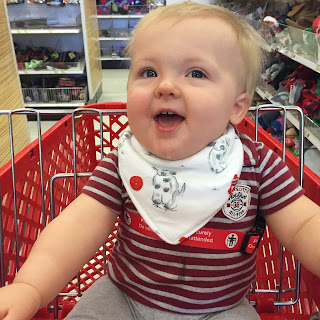 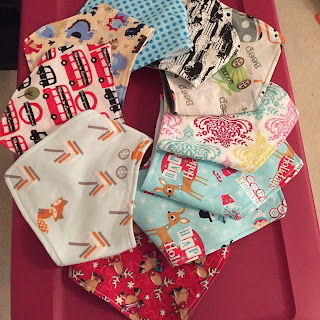 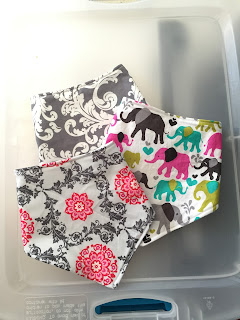 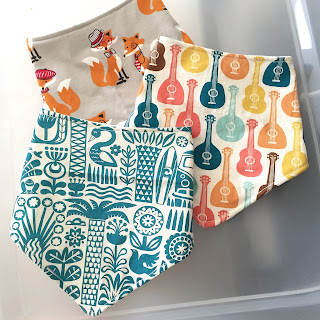 {Two} Holiday Crazies
I feel like I am still in Holiday handover mode.  While my Christmas decorations are all packed away in the attic, Christmas gifts are still strewn about with no home to go to because I don't have any more space.  The abundance of toys.... oy vey!
{Three} 175 Shades of White
Did you know there were so many shades of white?  Sheesh.  My mom is repainting my grandmother's dining room furniture for me to have and I decided I wanted it all white.  Now I have to narrow down the whites and hurry up and pick one already.  I've narrowed it down to Pure White, Snowbound, Hailstorm Gray, and Paramount White   .  I don't want it antiquey white or any white that may just look dirty and I don't want it stark white.  Ugh.  Just pick one already!
{Four} Maddox
I have a blog post almost ready that is just about Maddox but thought I'd write something here since I always seem to include him when I actually remember to do Five on Friday.  We are currently working through nap issues.  I took a new position at work where I will work Monday through Friday 9-1 and he will be in childcare/preschool in the same place.  This week has been the first full week and we are both having to get adjusted.  We get home by 1:30ish and he falls asleep in the car.  So now I'm dealing with the dilemma of, do I just take him in and lay him down even though he'll wake up in between and cry? Or do I bring him in, feed him a snack, let him wind down and then put him down (where he will still cry)?  Ugh.... This parenting thing.  I'm really just wingin' it.
{Five} It's The Weekend!
I'm so very happy to not have to work weekends anymore! I think tomorrow we are going to go set a crib up at my parents and prepare for Maddox to spend his first night at someone else's house without us.  Not sure that it will happen this weekend but soon.  Pray for me! lol I'm sure I'll have a harder time with it than he will.
Well...that's all I've got for now ;)

Link-Ups. If you have a blog and want to link up with other bloggers posting... Check out these Friday Link-Up parties :)

Posted by Melissa Smith at 7:30 PM No comments: