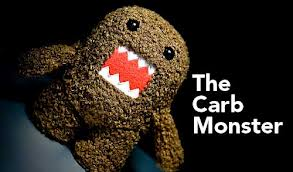 I know that some people think that Dr. Atkins' and all the other anti-carb people can be a little nutso at times but the more I learn about my body, the more I think they really know what they are talking about.

I believe that when it becomes uncontrolled, the carbs take over your body and become a carb monster.  This carb monster says "more....I need more carbs...feed me!" So what do I do? I don't make the good choice of the protein and low carb option...I pick up a pack of crackers or something even worse.  Then it's just a downward spiral from there.  You know in Austin Powers where the big sumo dude says "I eat because I'm unhappy, I'm unhappy because I eat".  Yeh...I totally get that.  Sugar is like crack basically.  You get a little bit of it in your system and you have to go through an actual detox to get it out and the few days that it takes to get it out of your system (if you're doing it right) can pretty much be hell.  Imagine an actual addict who is going through withdrawals.  I know it doesn't effect everyone that way but those of you who it does...I know you know what I'm talking about.  It's intense.  But once it's out of your body, you feel like a new person.  You think more clearly, you have more energy, you aren't as hungry, and you have a better overall view of life.

I'm saying all that to say...I'm kicking the carb monster out today.  I'm going to attempt to keep my carbs under 25-30 grams a day this week to get it all out.  Really the only place my carbs will come from will be from my shakes.  I've let myself sink into a sort of depression due to some personal issues that I'm dealing with.  And sugar + depression = bad news!  Chocolate really does not make everything better.  If anything...it makes it worse.  So anyway....that's the goal for this week.

Also, I've decided to trade in my fun money for a weekly session with a trainer.  It's going to suck not to get any fun money but I really need to work with a trainer.  This is the same trainer that I worked with a couple of years ago that really helped me.  He has left the gym that he was at to go to another gym so he's able to do private sessions out of the gym (which means I don't have to pay for a gym membership on top of personal training).  I can only afford to do it once a week though.  I just remember feeling so much stronger when I was doing strength training.  Even though I can only meet with him once a week, he'll give me a plan to do for the other days of the week that I can do at home using my free weights, etc.  My plan is to get up at 5am again, run on the treadmill (until it gets warmer) and do my strength training routine all before I begin my day.  I know I can do this.  I got so good at just getting out of bed and getting it done and felt awesome the rest of the day.  Then I got lazy with the move and everything.  So I know it will take a good couple of weeks for my body to get used to the idea again but I'm going to make it happen.

It also helps that our staff is about to start a 40 day fitness challenge that I plan on winning :)  This has become more about weightloss for me.  It's about strength, feeling empowered, and just overall health in general.  Time to stop feeling out of control.  This is a lifetime battle.

Anywho...that's how my Monday morning is going.  Have any new plans for yourself? Have you reached your breaking point (again)? Ready to start back at the basics?

Posted by Melissa Smith at 8:52 AM