Call It What You Will

I'm certainly not admitting defeat.  But sometimes...I feel defeated.  This weightloss journey (aka struggle) is no joke.  I don't know how many times in the past couple of months I've said "ok...time to jump back on the wagon...enough is enough".  Yet....still runnin' behind that wagon and too bad I don't mean that literally.  I haven't exercised in over 2 months (I don't count the one time running outside where I fell down since that was just ONE day).  I'm eating things I know I shouldn't but I can't seem to bring myself to stop.  I feel hungry all the time.  I am getting the protein that I need but I think the carb monster has sank his ugly teeth into me and is not letting go.

I know if I could just make myself start getting up early again and running on the treadmill then I would get used to it quickly and be back to where I was tolerating enjoying it.  I'm just in one of those places right now mentally where I'm having a hard time.  I haven't gained any (well...bouncing up and down 2 lbs) but I certainly don't want to wait until I am gaining for it to be a wake up call.  I know if I don't exercise first thing in the morning, more than likely I'm not going to.

I don't go on the weightloss surgery facebook group much any more because I kind of get tired of seeing people who had surgery around the same time as me who have lost so much more and haven't even exercised.  I could just say that I'm content where I'm at.  I mean....I have lost 90lbs.  But I set a goal for myself and I'm still 20-30 lbs from that goal.  I don't want to give up on that.

I haven't really talked to anyone about this (other than Darren of course) because I don't want to hear "you've done so well, just keep going" or "you just have to do it" or whatever it is that people say to someone that has this problem.  No one wants to hear that really.  And I've had people ask me how much I've lost now and I'm ashamed to say "oh I'm still holding at 90lbs".  What? Why should I even respond that way? 90lbs is almost the size of a small adult...I should be super proud of that.  I just feel like that number should be higher.  I want to be able to say I've lost 100lbs by the time I hit my one year "surgiversary".  While some would say "that's only 10lbs", I say "holy crap, that's 10 whole pounds...that's going to be a struggle".

And part of me knows that I need to probably focus on strength training more than anything and I have 10lb weights.  I just can't bring myself to do anything consistently.  It's like I'm stuck in this rut that I can't dig myself out of.

ok....well that's all the venting I'm going to do right now.  You add in some jacked up hormones to all that and it makes for one heck of a mental battle.

I saw this on a facebook status yesterday and thought it was appropriate.  Now if only I can remember it. 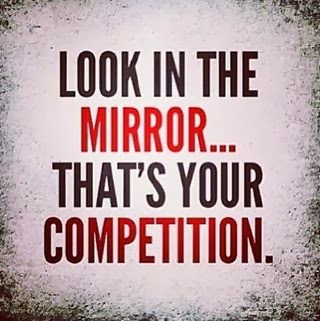 Posted by Melissa Smith at 8:55 AM