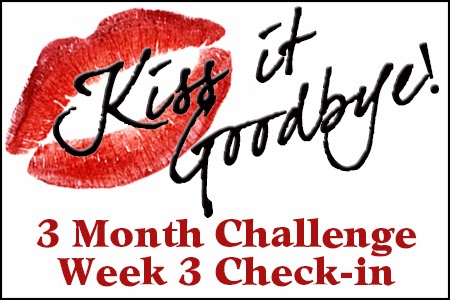 It's crazy how quickly time passes isn't it?  This week, I worked out 3 times doing my c25k program.  I even did those workouts on Friday afternoon and Saturday morning!  I haven't felt compelled to work out on a Saturday in probably 12 years (aka...when I was in high school)! And this morning, I was up at 5am to get dressed and go down to our apartment gym.  Craziness!  I really did enjoy getting my workout over with this morning though.  I just haven't had the energy or motivation to do it when I get home.  Granted, I had to go to bed at 9pm in order to get up at 5am  lol but oh well...

I didn't lose anything this week.  I made an announcement on Facebook that I was taking the batteries out of the scale.  Darren reminded me that it has to be reprogrammed every time you do that so I'm just having him hide it from me lol  I will weigh in on the 20th of each month because that is my surgery date anniversary.  I'm so tired of bouncing up and down 2 pounds so I just don't want to see it any more.  I know that starting a new exercise routine can throw weightloss off and other female things can lead to water retention.  So I'm just going to focus on succeeding with my c25k program and take my measurements and not worry so much about numbers on the scale.

Today, I've noticed that by getting up earlier, my water intake has been better.  It's only noon and I've already had about 40oz of plain water.  I read in an article the other day that you should drink half your body weight in water. WHAT?! I can barely get in the "suggested" 64oz a day.

Yesterday, I made it to dinner with only about 25 carbs for the day.  But for some reason, I was just so hungry.  I probably wasn't really and probably should have just drank more water...but what did I do instead?  I ate a big spoon of peanut butter (the bad addicting but oh so good kind that I said I was breaking up with) and then had a protein bar.  At least I still stayed below 50 grams of carbs so it could have been much worse but still....I'm trying to do better!  Today, I went ahead and put in all my food into My Fitness Pal and as long as I only eat what I put into it, it will be about 25 carbs but it's only 900 calories.  That's before you factor in the calories I burned.  So I guess I will find out if that's ok or not.  I'm also trying to not eat past 7:30pm.  We'll see how that goes.

So that's pretty much my week in a nutshell :)

Posted by Melissa Smith at 2:39 PM

Email ThisBlogThis!Share to TwitterShare to FacebookShare to Pinterest
Labels: Kiss It Goodbye Challenge