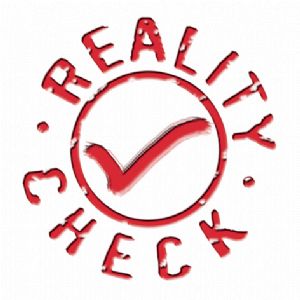 I was glancing through a couple blogs that I keep up with and three of them posted on basically the same topic.  And they had some really great points that I wanted to share.  I needed to hear them but I think anyone who has had weight loss surgery or is thinking about it needs to hear it as well.

They were talking about unrealistic expectations.  Sheila from This One Body posted a very interesting article on the realities of weight loss surgery success.  It was entitled "Why Bariatric Surgery Can Fail".  It talks about how realistically, people who have weight loss surgery can expect to lose on average 20-30% of their initial weight.  I think a lot of people get in their heads that just because they have surgery, they are going to get down to a normal/healthy bmi.  To be considered a "normal/healthy" bmi, at the top range of that scale, I would have to get down to 165.  I may have weighed that in elementary school (no, really...).  I would look sick if I were down that low and I don't consider that healthy (for me personally...with the way I'm built).  But some people are told that that's where they need to be so they set these unrealistic expectations for themselves.  When they don't reach those goals, they consider themselves a failure despite the fact that they are so much healthier by losing the weight that they have.  Then the result of the "failure" can ultimately result in falling back into their old habits.

When I initially met with my surgeon, he didn't tell me that I needed to get down to 165 or lower thankfully.  He asked me what I wanted to get to in order to consider the surgery a success.  I thought that was great and I was thankful for that.  However, after surgery, I've only met with the PA that works with the surgeon and I can't really say I'm a big fan.  I feel like she just goes through the motions and the check list.  Basically when I go to my follow ups, I've never really asked her a question because I've never felt like she actually cared or knew what she was talking about.  And each time, she'll say, "ok by your next appointment, I'd like to see you at ___% excess weight loss".  I have to ask her how much that would be so I know what my goal needs to be for the next appointment.  But I've kind of gotten to the point where I'm more concerned with MY goals....not hers because she's reading hers off of a paper and that drives me nuts.

At this point, I'm at 26% weight loss from my starting weight.  To get to my goal, it would be 38% weight loss....which even though it's above average, I really believe that it's doable.  However, if for some reason my body stops losing, I am not going to just throw in the towel like I did before (granted, the last time I weighed what I do now, I was 17).  It will just mean that I need to reset my goals to focus on other things like toning and fitness levels (which should be part of my focus now anyway).  I remember what it feels like to weigh 78 lbs more than I do now....it SUCKS in every way...physically, emotionally, psychologically!  I never ever ever want to be back at that point no matter what.  And I would hope and pray that if I were starting to gain and go back to my old habits that someone would step in and confront me about it...no matter how badly it would probably hurt my feelings.

If you are considering having surgery or you have already had it and are looking for more encouragement from those who have been there, done that, definitely check out these blogs...they are my favorite ;)  I really enjoy reading them because they are all real.  They don't sugarcoat the journey of someone who has been through the surgery and I appreciate that.
Sheila at This One Body
Tamzin at Move Aside Fatty
Linda at Linda Sherwood