The listing for our house should be up by now.  Not really sure if it is or not but I thought I would post some before and after pictures.  The before pictures are the day we went in to start the deep cleaning and found the nastiness that the renters left behind.  Granted the before pictures were taken with an iphone and the after pictures were taken with a canon 5d but you get the point. 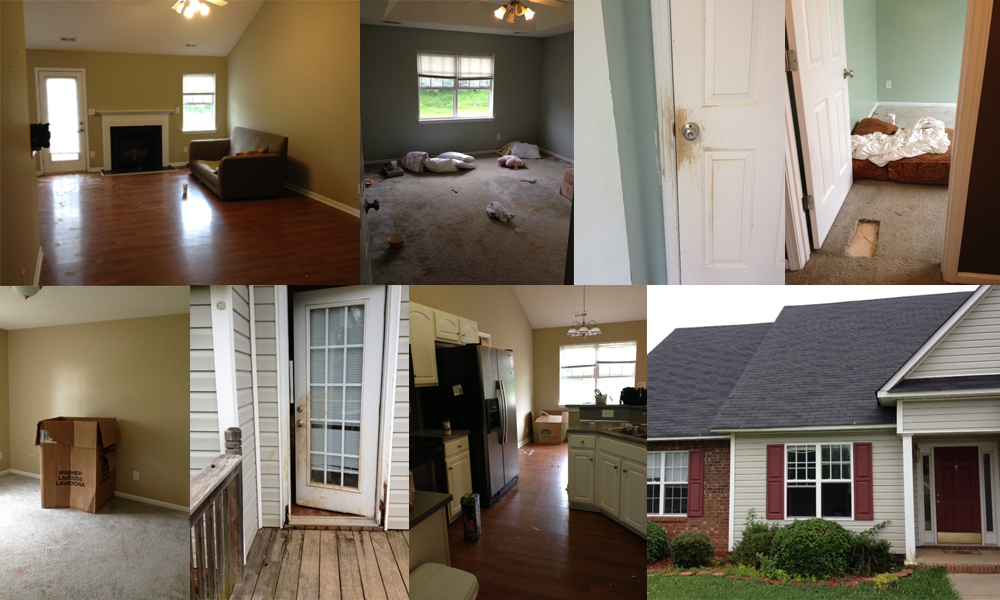 Starting top left: Living room with junk left behind and filthy floors.  Next is master bedroom with the grossest carpet I've ever seen and he smoked in the bedroom and bathroom and it smelt disgusting.  Third is the master bedroom door that the door scratched.  Fourth...who the heck cuts a rectangle out of the carpet and padding of a house that is not theirs?? That's going into a spare bedroom.  Fifth is random stuff they left in the other spare bedroom.  Sixth is the backdoor where the dog ate the facing off and scratched it a bit and the deck looks gross.  Seventh is the filth they left in the kitchen.  If I could have taken pictures of the dozens and dozens of flies that were in that house, I would have...blech!  Last is the front of the house.  Just looking run down.  Sad looking really. 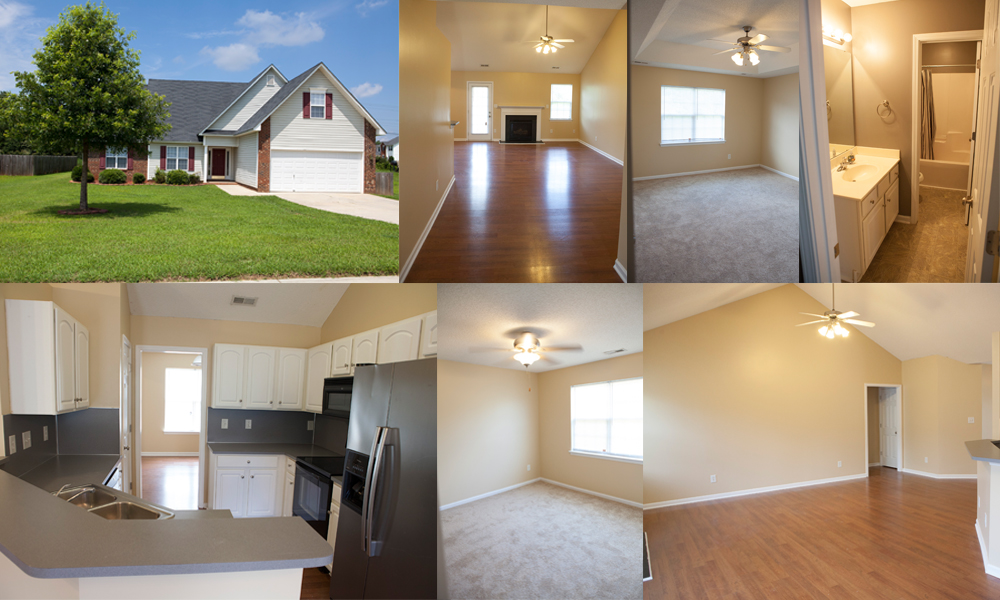 With a LOT of help from friends and family, we got the house to look like this.  I took several other pictures but these will give you an overall of what a big difference was made.  I took all the pictures myself and sent them to the realtor.  I'm really picky about stuff like that because I think that pictures can really make or break a house on whether someone wants to take the time to see it in person.  I think these showcase the house pretty well.  I would want to see the house.

Several people have asked us why we don't just move back in...especially now that it's clean and new paint and new carpet, etc.  Well there are several reasons.  First reason is that we really wouldn't save any money moving back in and we would be right back in the position that caused us to want to move out in the first place.  Secondly, it would add 30 minutes (at least) to Darren's commute to and from work and it's really not worth that at this point.  Thirdly, I don't want to move back in because I feel like my house has been violated by these people and I really don't think I could get over that  lol  There are a couple of other reasons but I'll stop at those since those are the top 3 :)  It really is a nice house.  It's a good size, good layout.  Before we rented it, if I could have picked it up and moved it to about an acre lot with trees around it, I'd have been perfectly happy staying there.  Oh well.  I'm certainly not emotionally connected to it.  It's the first house that we owned together and while that part is sad...I'm ready to move on.  We learned what we liked about it and what we didn't like about it and that will help us in our next house search (whenever that will be).

So what do you think?  Big difference right?