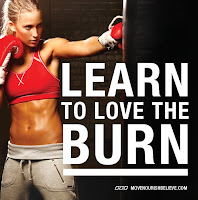 If pain is weakness leaving the body then good riddance because my gosh I'm hurting.  I'm pretty sure there are muscles hurting that I forgot I even had.  I went boxing on Monday and it was great and I hit it hard for sure.  Even the trainer said I did a pretty good job keeping up.  I'm going back tonight just for the sake of working some of the soreness out.  Tonight is kickboxing and I haven't been to that class before so it should be interesting considering that I hurt everywhere already.  Stupid squats....ugh.  Part of me is glad that I actually took the initiative to join this place even though I know no one there but another part of me wishes I had a boxing buddy.  I recognized several of the people there from the last class I went to but there were a LOT of new faces also because the club put a Living Social special out for people to get 2 weeks for $17.  I doubt that most of the people will return after that 2 weeks is up though.  It's $79 a month to be a member there.  I know that's a lot but you just get such a different (and in my opinion better) workout there than you do at a normal gym.  Plus I kind of like people yelling at me (I mean....in a supportive way) lol  I'm looking forward to seeing my body change in a good way and if that means being in pain for a while until I build my strength and endurance....well I'm going to learn to love the burn. :)  The only thing that I kind of miss is that when I was doing Strike at Lifetime Family Fitness, there were about 12-15 of us that were there several times a week and it's almost like we built a camaraderie.  They would split us into groups of 3 and we would go around the circuits together and we would encourage each other when someone was having a hard time keeping up or wanted to quit and man....that just makes such a huge difference.  I mean....at Title Club the trainer is yelling at everyone saying "there's no reason why anybody should be stopping!" but it's not quite the same thing as "come on Melissa! You can do it.... just a lil' bit longer...you're doin' great!".  Anyway......just my thoughts :)

Posted by Melissa Smith at 4:46 PM

Email ThisBlogThis!Share to TwitterShare to FacebookShare to Pinterest
Labels: exercise